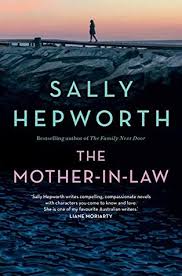 I chanced upon The Mother-in-law by Sally Hepworth as one of the must-read beach reads of  2019 . The title flipped some switch inside my head and I remembered that I had it on my Kindle . I had got it from Net Galley . But after reading books with hackneyed plots ( like about an impostor nanny with Munchhausen syndrome who is also a writer ) , I was wary about  trying out any Net-galley offering . But , thankfully , it turned out to be a pretty  satisfying read .

A staunch advocate for women refugees , a prominent member of the community hailing from one of the wealthiest families & not to forget the lady’s elegance , Lucy had been properly intimidated by Diana Goodwin – her prospective mother-in-law during their first meeting . When Lucy did get married to Diana’s son eventually , she looked forward to gelling with her better and reverse Diana’s opinion of her being only a fine girl . She wanted to impress Diana properly like Diana had impressed her .

Lucy tried , very hard , during the early days of her marriage , to win over Diana but eventually gave up . But , then , she didn’t know Diana back then . Diana had an innate reserve that nobody had quite managed to navigate past  – even her children . Diana would offer sympathy , solid advice or would simply listen but she would never extend financial support . It seems that things haven’t changed much in the Goodwin household even after all these years . . .

And now , Diana is dead . While her suicide note suggests that she had taken this step because of her cancer , the autopsy does not find any cancer . . . But it does find traces of poison in her system and signs of suffocation .

Now that the police are looking for motivations for Diana’s homicide , there seem to be several reasonable ones . And there are several questions too -Why was Diana’s will changed at the eleventh hour to disinherit both of her children, and their spouses? And what does it mean that Lucy isn’t exactly sad Diana’s gone ? Why would Diana lie about the cancer ?

Of course , there are interesting secrets and it seems everybody knows something about Diana’s death which they are not letting out . . .

My thoughts on the book :

The premise of ” after x’s death ” is not a new one but the choice of the MIL – DIL relationship as the focal point for the narrative of the family’s dynamics is new . Both are very engaging  & often witty and their voices are done well .  Through Diana’s and Lucy’s narratives , we come to understand their relationship in a way which they never would , because we get an uncensored view into their mind workings . The host of secondary characters have also come out well .

I have a few things which did not sit well with me though . . .

For one thing , there were too many sub-texts / afterthoughts within the parentheses ,  which I felt , cramped the free flow of the narrative . Another thing which I thought was very unnecessary is the time-stamping throughout the book . . The voices of both Diana and Lucy are very distinct and the reader can easily get to know who is speaking and of which time-frame the narrator is speaking about . I think the readers today have been exposed quite well to alternating time-frame narrations and multiple POVs that they don’t require much help from the author by way of PAST and PRESENT time stamps along with the narrator’s name at the start of every chapter .

I want to ask the writer just one thing – Why don’t you trust the readers to work out these little things by themselves ? If the voices of your characters are distinct , then you don’t have anything to worry about ( Sally H can be happy as her characters ‘ voices  are really done well . She just needs to have some faith in her readers and herself ) .

On the whole , Sally H. kept me turning the pages until the not-so-twisted end ( and for few above-mentioned hiccups ) and for that , I have to thank her .  It would not do to forget the publisher , St . Martin’s press  here – A big thank you to whoever approved the e – ARC on time .

Follow On Books,Movies and other Random stuff that make my Day on WordPress.com